Warning : This could be a fairly long post – 5 years of blood, sweat & tears!

When we first visited Les Crouquets in May 2006 the pitch & putt was a field of weeds, barren patches & remains of corn stalks from years gone by when it used to be worked by the neighbouring farmer. 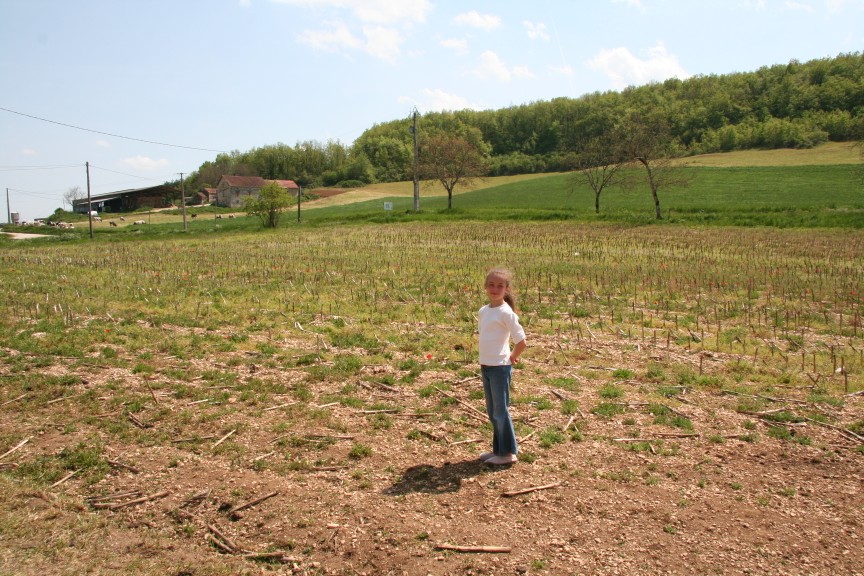 The pitch & putt started off as an empty field

By the time we bought the property in September 2006 the weeds were waist high. The day we moved in the old owner had arranged for it to be given a rough & ready plough over – the reasons for doing this were long, complicated and very much a token gesture so it wasn’t a pristine job! We were left with a 2 and a half hectare field of limp, dying weeds,churned up stones & boulders. Not pretty.

But we had 8 houses plus all the other more pressing grounds issues to worry about and as we had no clear idea what to do with this derelict land, for a while that’s how it stayed. As word got around that new people had taken over, farmers from all over were coming out of the woodwork to stake their claim. Land is everything to farmers and in France they, along with their close cousins the pharmacists, have a very powerful lobby ( if you’ve ever run out of paracetamol on a Sunday morning you’ll know what I mean)  – if we didn’t work this land and soon, there was a real possibility that we could be forced to hand it over for agricultural use.

We considered lots of options including a walnut grove, a plantation of green oak trees to hopefully one day discover kilos of truffles at their roots and rather naively even a landscaped park with walks, sitting areas and a corn maze….in the middle of all of this Amar suddenly announced that he thought we should have a golf course. Every man’s dream. 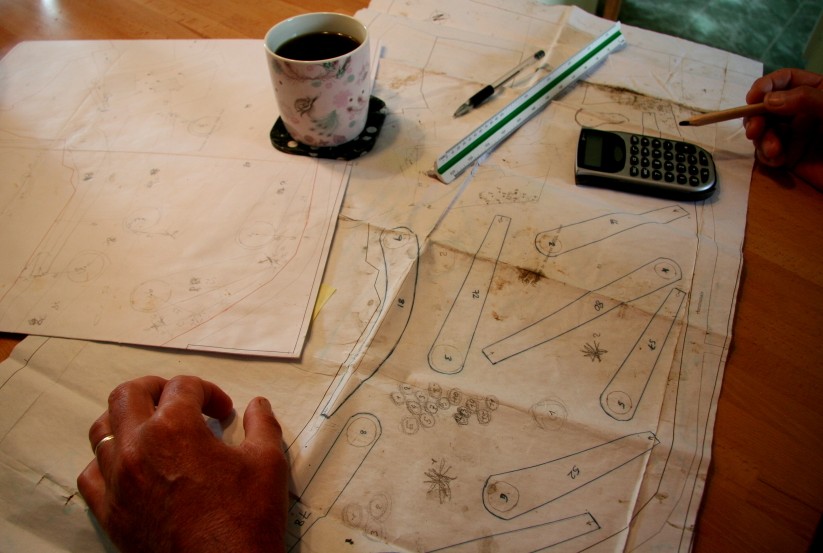 And so the plan was hatched.There was no way we could afford a professional company to do the work but Amar was undeterred – he would build it himself with a little help from his friends, Google and other experienced people in the know. Plans were drawn up to ensure the best layout for the course, both in terms of play and safety. Being Mrs Risk Averse I was particulary keen that it would be impossible to splice a shot straight into someone’s BBQ, even for the very worst of players. I insisted on it which led to the course being redrawn several times but in the end even I was happy with the result.

With the plans completed,the real work began. Firstly the field was properly ploughed. 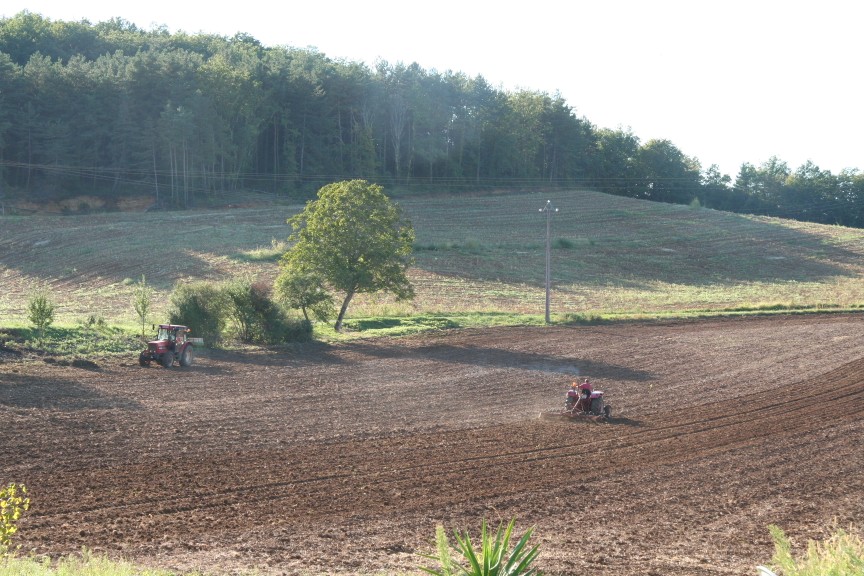 The real work starts by ploughing the field - September 2007

Then followed weeks of picking up stones…..a back breaking job which was to last much longer than we’d anticipated. Just when we thought we’d finished, more would come up to the surface. This continued for a year or so but thankfully now seems to have settled down!

Next step was to dig irrigation trenches leading to all of the greens. We are lucky enough to have a private well albeit inconveniently situated at the top of another farmer’s field and we pump the water down to a large tank which used to be the slurry pit for Les Crouquets’ pigs. (Amar ended up in hospital with a damaged shoulder after cleaning it out but that’s by the by.) Rain water from the gites’ & games room roofs is also collected in another well which then feeds the tank. 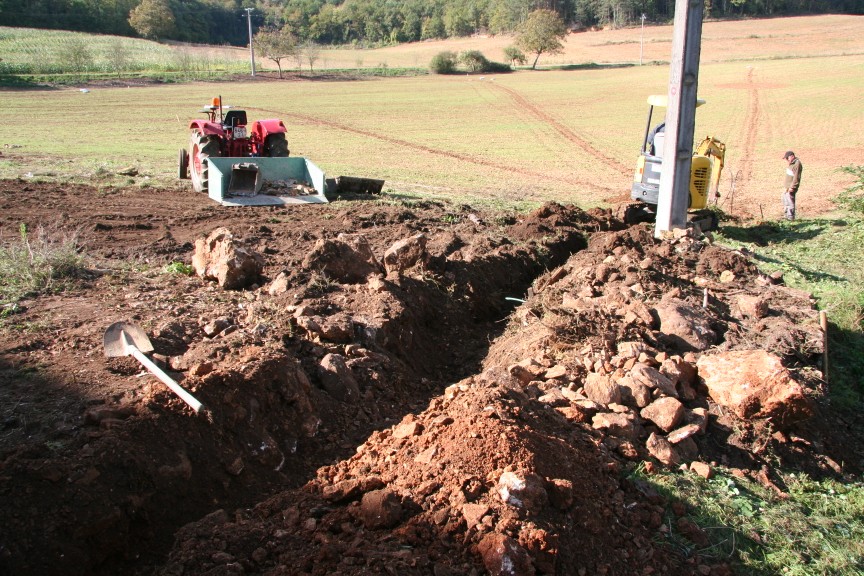 Preparing the irrigation trenches before laying the water pipes - Oct 2007

Laying the water pipes was never going to be easy but luckily during his research Amar got to know someone in Bergerac who had built his own golf course and he kindly lent us his home made pipe laying machine ( for want of a better description!) – this & a little help from a couple of friends made the job a lot easier! 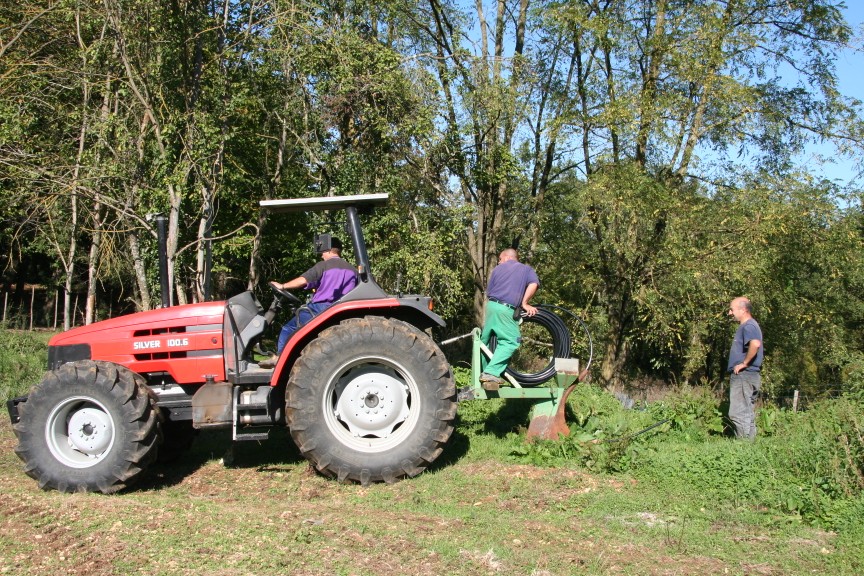 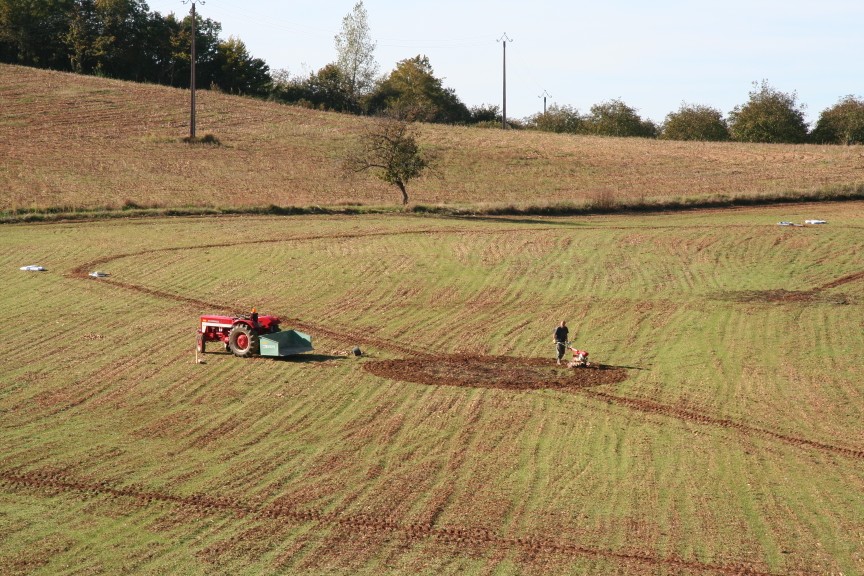 The irrigation piping to the greens is now installed! 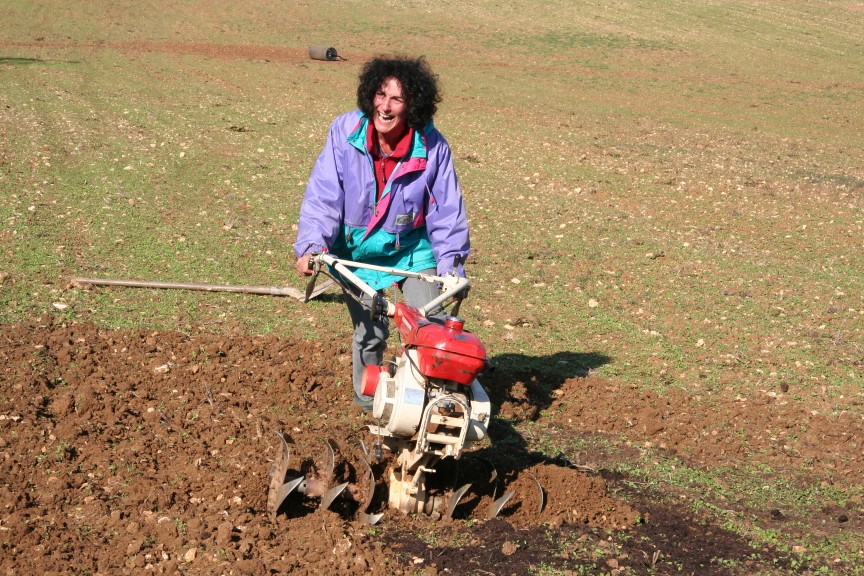 Just had to help - unfortunately my sense of humour & lack of strength were illsuited to the job! The beast had a life of its own & best left to those who could tame it!! 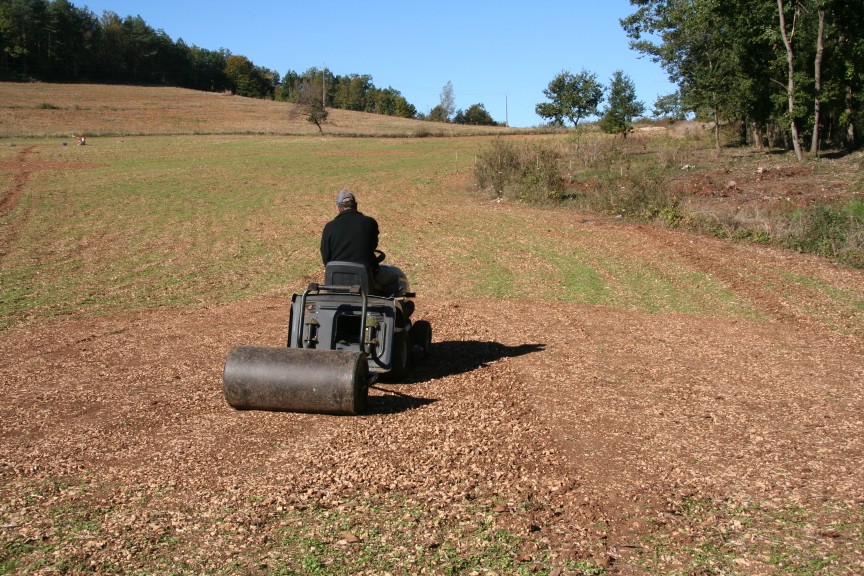 With the essentials in place & waiting for the grass to take hold we turned our attention to planting shrubs & trees to add a bit of interest to the landscape! 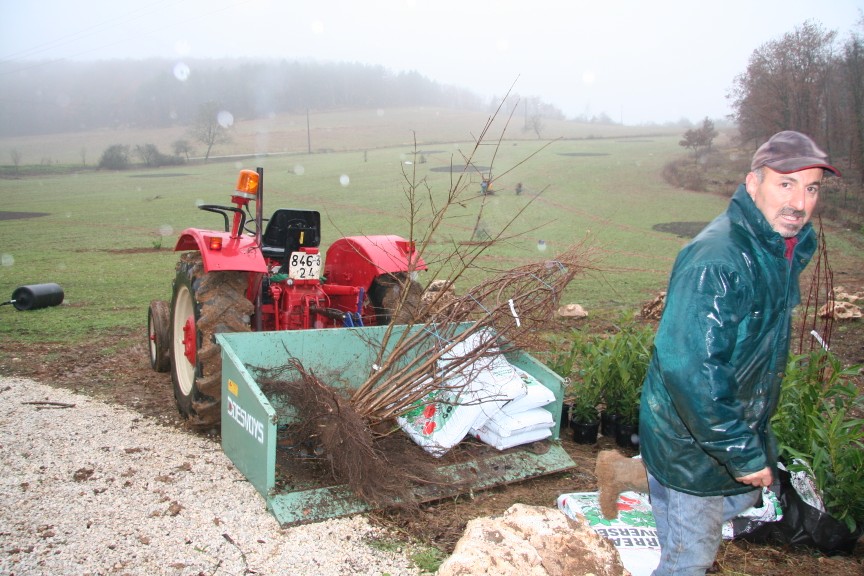 A very rainy day - not the best for planting! November 2007 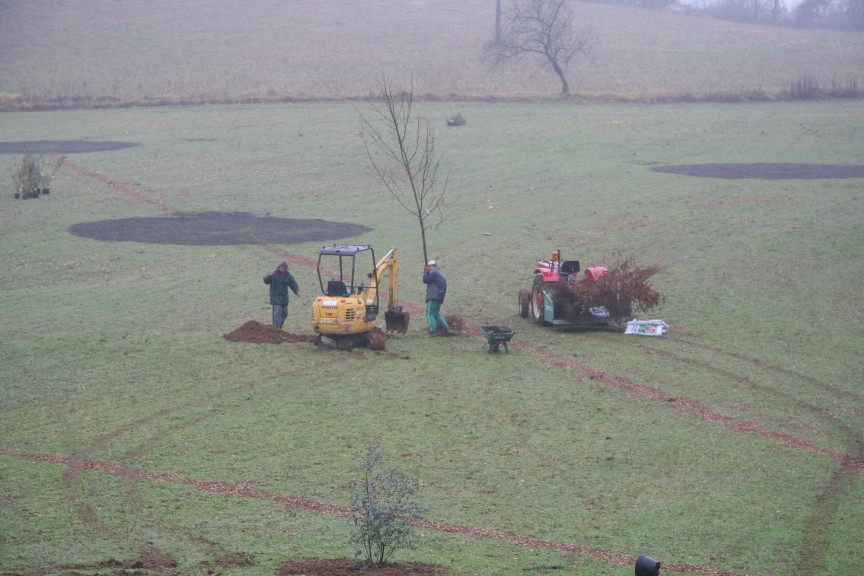 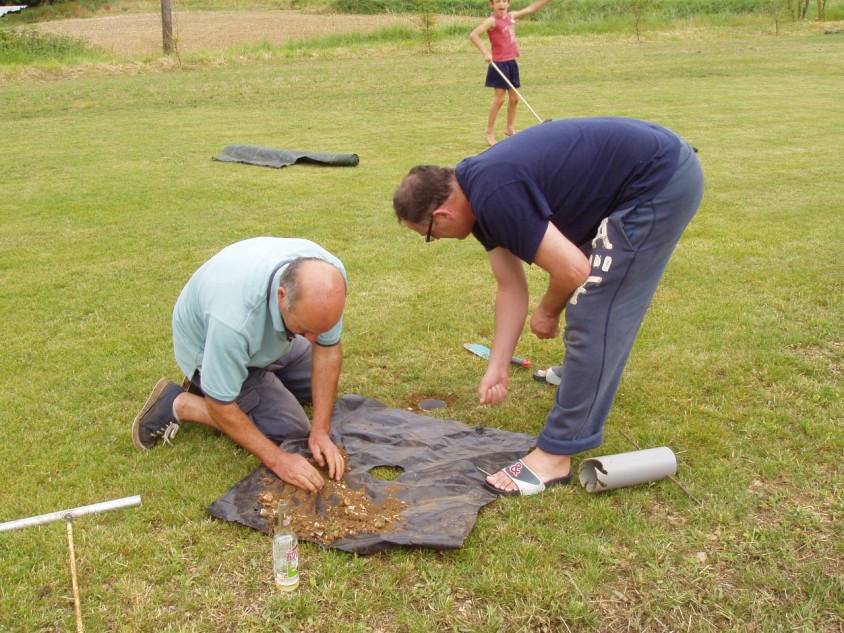 Fitting the cups into the greens with a little help from one of our enthusiastic guests! 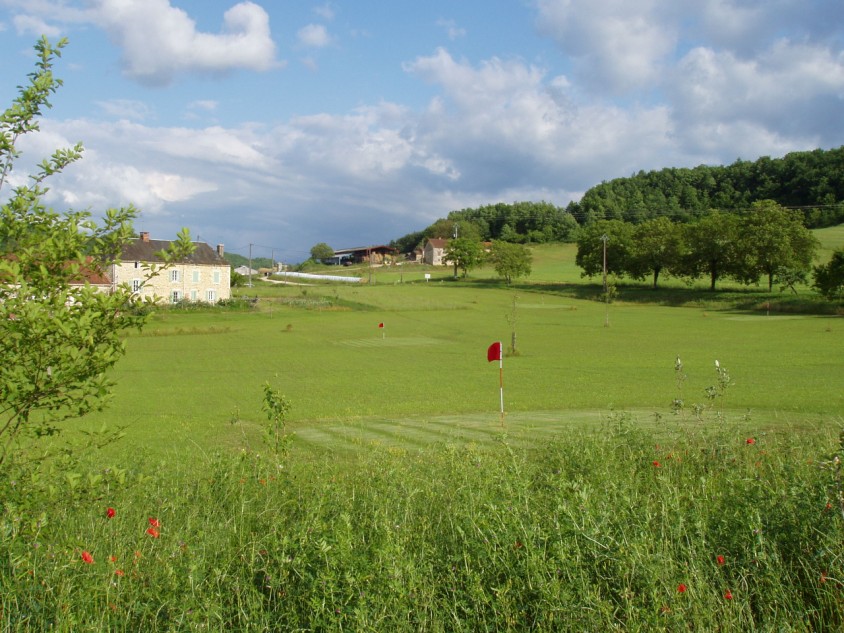 18 months on however we were paying for our first major error – asking the local farmers’ advice on which grass seed was best. Not our finest moment. They were happy to help but everyone had a different opinion & of course they were farmers, not golf experts…I remember one farmer asking Amar why he was planting so many big round flowerbeds…

The fairways were fine with the rustic grass but the greens didn’t flourish even after sowng them again in 2008. Eventually in April 2009 after much research a different grass seed was found, the turf was taken off, new, clean earth relaid and the greens were completely resown. 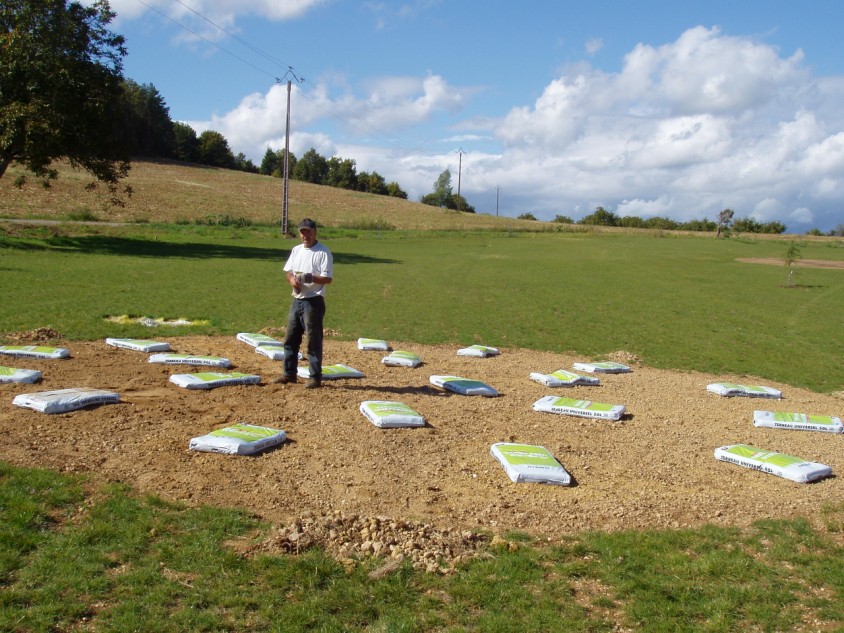 preparing the greens for resowing 2008

The very expensive drought resistant grass seed for the greens was ordered from the UK. No sooner than it was sown we watched in horror as armies of ants carried half of it off to feed their troops. Adding to the nature challenge were hundreds of wild rabbits, labours of moles and the occasional sounder of even wilder boar which would come out to play at night and destroy all our hard work. 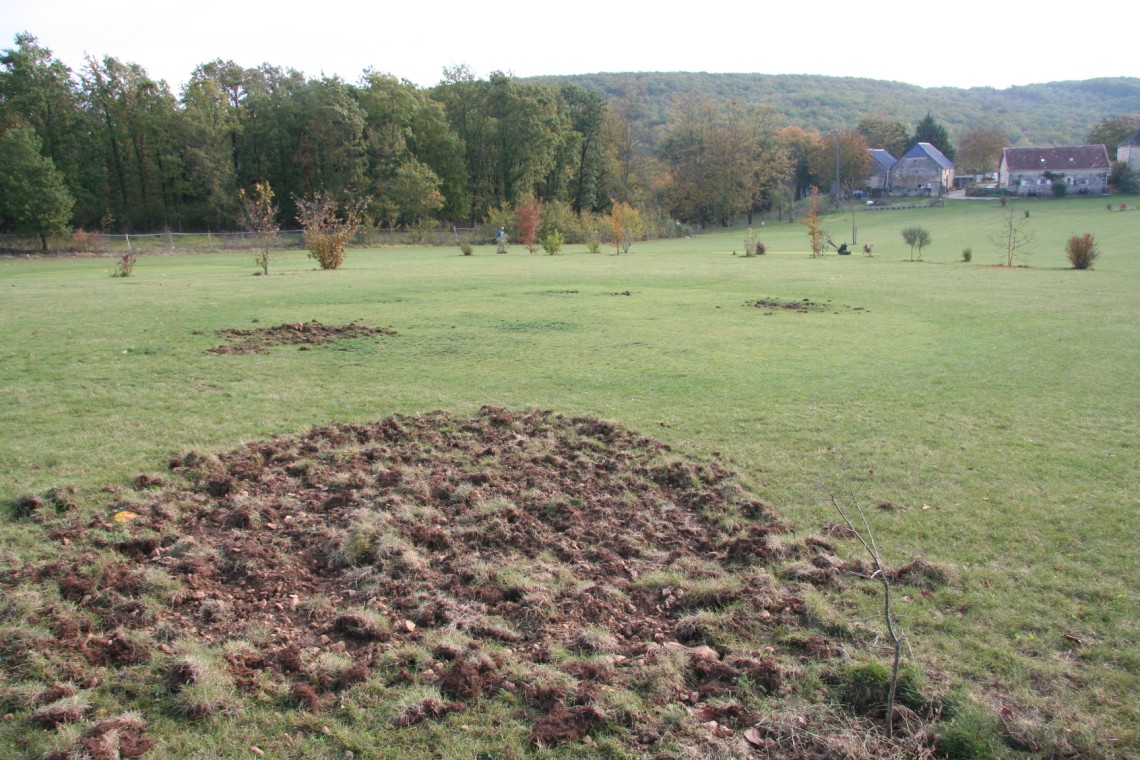 The results of a night's partying by the wild boar - 2008 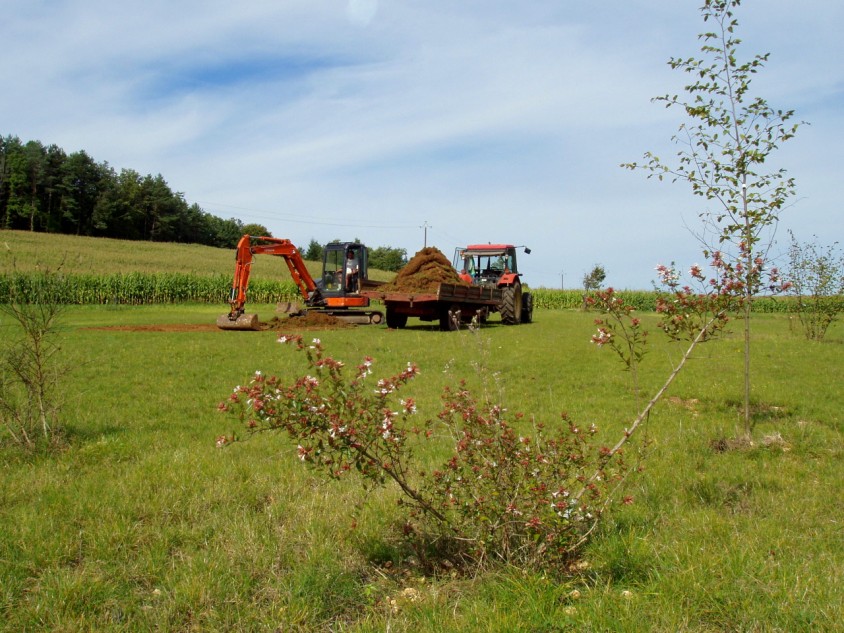 Preparing to resow the greens again in April 2009

It was also around this time that we got a letter from the law courts telling us that the neighbouring farmer had decided to reclaim his right to work the land which was now our precious pitch & putt. This was a very stressful & expensive time for us – even specialist rural lawyers couldn’t guarantee we would win if we went to court. We didn’t want to go down that route anyway – feuding neighbours weren’t part of our idyllic country lifestyle. Those of you who know the full story will know how many sleepless nights & tears were shed over this. For everyone else it’s enough to know that with the support of the mayor & the local community and much diplomatic negotiation & biting of tongues, all has been resolved.The farmer now works with instead of against us which is obviously the best outcome for everyone.

Occasionally the farmer’s cows would go walkabout & find their way on to the pitch & putt course. Trying to steer them back home was always nerve wracking as they had to be kept off the greens at all costs – big hoof holes would not be easy to repair. 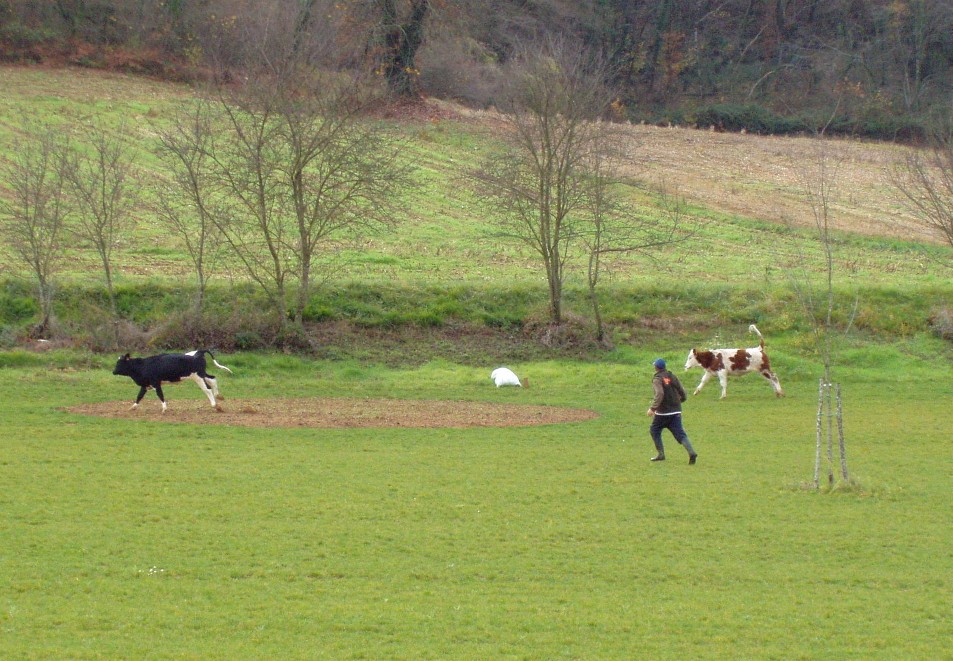 The growing greens - trampled by the farmer's cows

The decision was then made to completely fence off the course. Another mammoth task.

On the whole this was a massive plus point but the opposite side of the coin was that if anything big did manage to find its way in, the way out was not very apparent as we twice discovered – once  Laphroaig spotted a deer wandering around and was so determined to hunt it down that he snapped his lead and gave chase. I swear that dog is half labrador,half greyhound – according to his previous owners though he is actually half lab, half big black dog from the village. Thankfully the deer survived in spite of being brought to the ground 3 times. Second was one soggy morning when we woke to find the farmer trying to round up 8 cows which had somehow still found their way in & were running amok on the golf course. Amar was distraught & the farmer completely bemused as to why the big round patches of grass were more important than the rest… 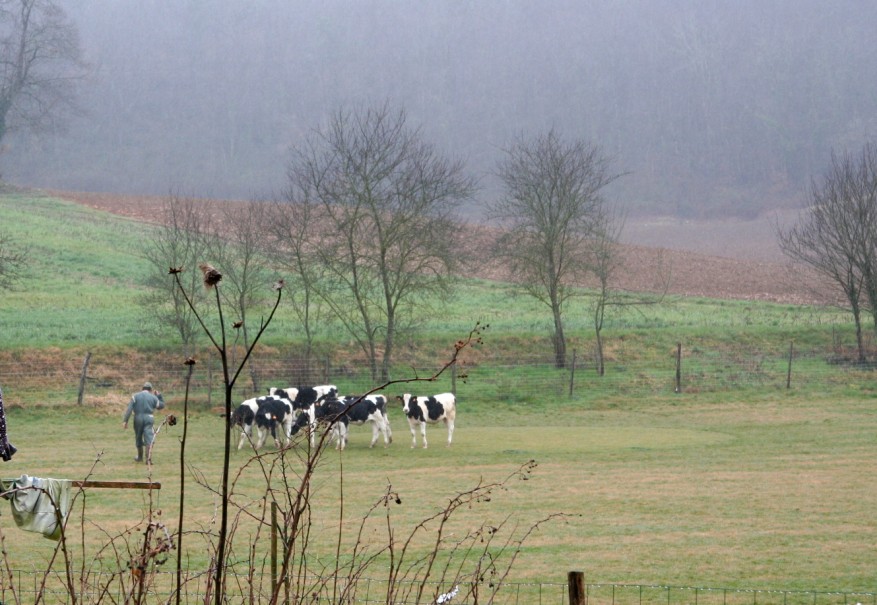 Cows with no way out, all congregating on the "big round patches of grass"!!

Gradually though the hard work started to pay off and everything began to just naturally fall into place. Having managed to finally more or less outwit the wildlife with electric wiring, chicken wire & rags doused in diesel ( rabbits hate that apparently ) we now had to turn our attention to ….the guests!

We have never charged extra for using the pitch & putt – the downside to this is that most people will give it a go even although they have never played golf & don’t fully understand the implications of not following the rules. In the beginning we witnessed some hair-raising moments – young children running around while others were teeing off & then walking away gaily swinging the golf clubs above their heads ( Mrs Risk Averse’s worst nightmare), people teeing off from the middle of the greens leaving huge divots behind ( Amar’s worst nightmare), people picnicking on the greens, presumably because these were the nicest patches of grass and so on..!!

We now have a new set of guidelines in all of the gites and Amar had a big board put up at the start of the course to remind people not to dig holes in his greens! 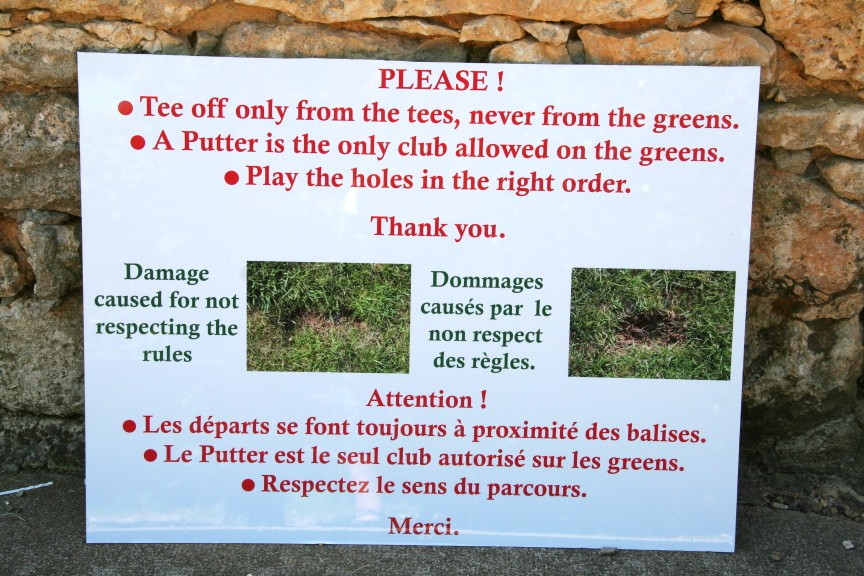 The sign at the start of the course - no prizes for spotting the deliberate grammatical error!!

Life is altogether easier now as after years of trial & error Amar now has got better, more suitable lawnmowers which do a great job. Good, affordable golf equipment is not easy to source in France – we were lucky that our good friend Roger Parry from GMP Print Solutions was able to deliver them to us from the UK! Amar has also got to know the greenkeeper at Souillac Golf & Country Club who is always willing to offer advice. They offer our guests 15% off a round of golf there & our regular guests often join Amar in a game or two during their stay. 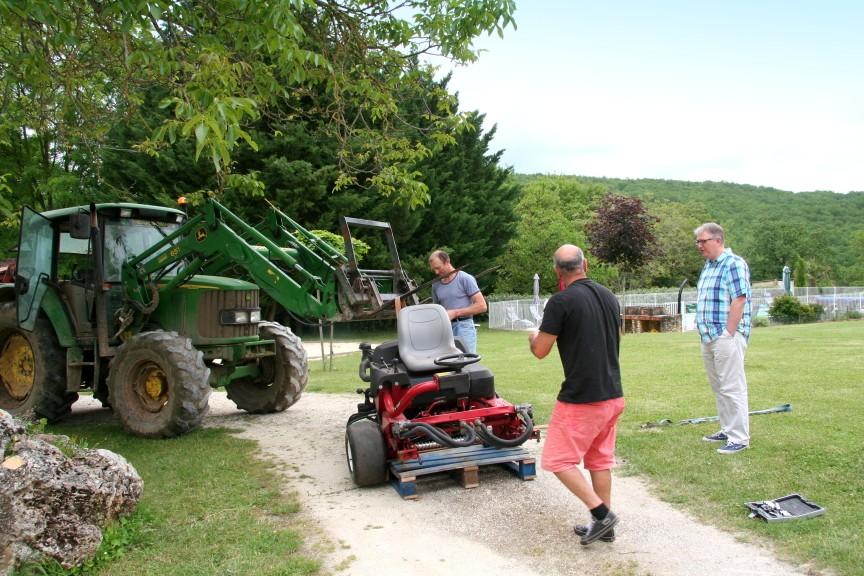 Latest Toro lawnmower delivered from the UK by our good friend Roger Parry from GMP Print Solutions and unloaded with the help of the aforementioned farmer! 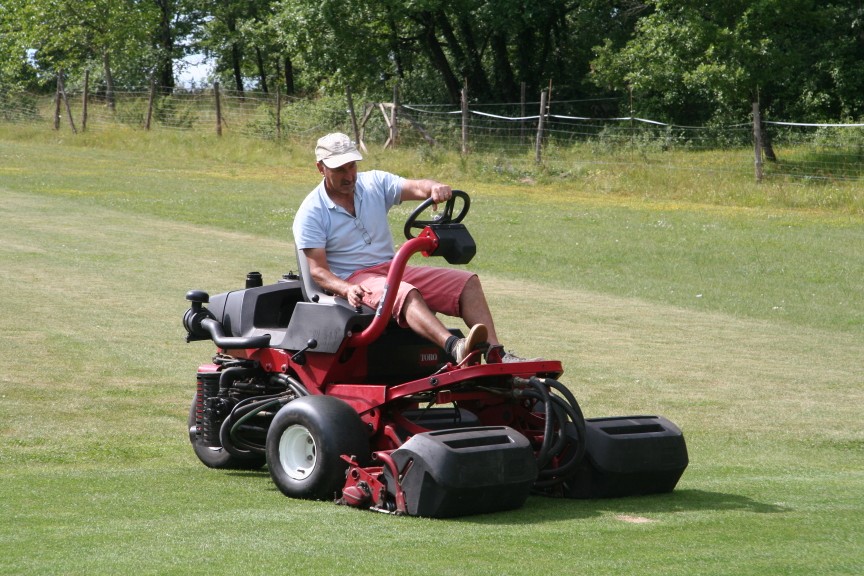 Oh joy...mowing with a real lawnmower!

This year Amar decided to create more of a challenge and added some planted hills which I like to call his alternative bunkers. 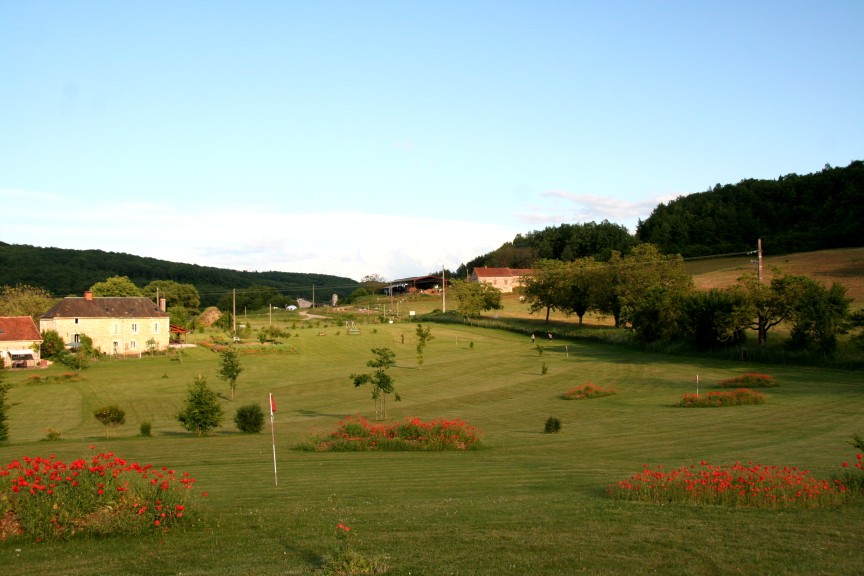 The alternative bunkers all covered in bright red poppies - June 2012

We have lots of regular guests who come back year after year & who have lived through this with us keeping us motivated & inspired and a certain level of friendly rivalry has now crept into these holiday ‘tournaments” – level par has been achieved only once back in 2010 – Mr B, you remain unbeaten!! 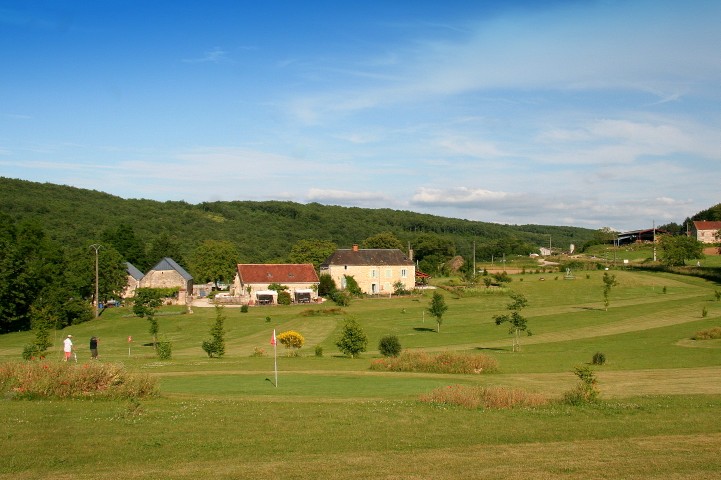