We have 3 miniature goats, Bibi, Figloo and Fudge. They have a huge enclosure in the woods, just behind the hen house. I feed them once a day – just a handful of corn as they have more than enough sustenance all around them – and marvel at their antics. They are our 100% eco friendly hedge trimmers and they keep most of what would be an overgrown jungle in an acceptable if somewhat rambling state. Quite simple, really. 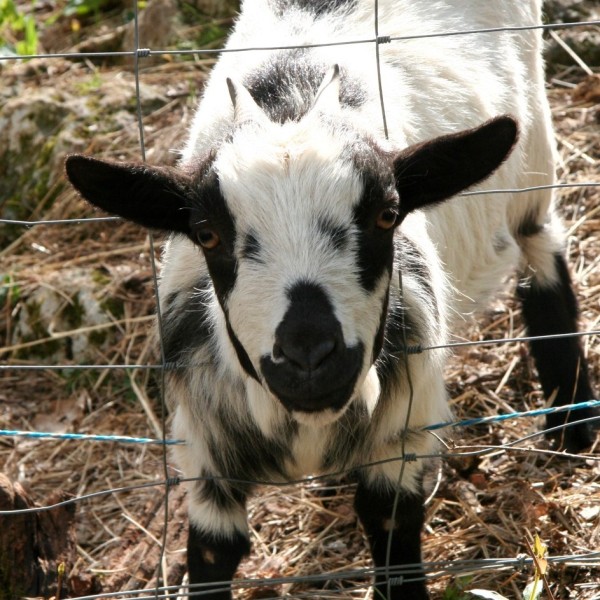 However our first experience with goats wasn’t that straight forward.

We had always talked about having goats so when a friend’s goat had a kid and he couldn’t keep it, he asked if we could give her a home.

Our friend lived & worked in the grounds of a stately home and was only allowed one goat, so how the kid came to be there in the first place is anyone’s guess but we were only too happy to oblige!

Betsy arrived one Saturday afternoon – she was cute,comical and just adorable! The joy though was to be short-lived.

Susie & the 3 sheep, surprisingly didn’t want to know and physically barricaded the stable door,keeping her out of their circle. Betsy bleated constantly like a lost child crying for its Mum. All very stressful and not at all in keeping with our idyllic country plan! 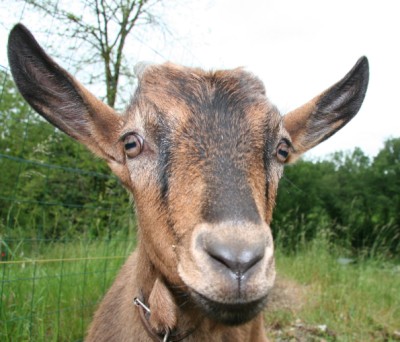 Betsy, getting up all close & personal with the camera!

After much unsuccessful coaxing and cajouling we decided to leave them to it in the hope that they would all gel eventually.

That particular night was the school fund-raising Bingo night.
We did well,between us managing to win 4 tickets to Eyrignac Gardens, 2 tickets to the ballet, a box of sun screen products and a fat duck ,oven ready I hasten to add, for it’s not unknown for loud, squawking, living geese to feature as bingo prizes here! But our minds were on Betsy.

We got home at 1.30 am in the pouring rain and immediately went to check how things were. Not good.
Betsy was still in front of the stable door, completely drenched & still bleating with the little voice she had left, since she was now quite hoarse.

We obviously couldn’t leave her like that so Amar thought we could maybe take her to the barn where she would at least be dry. Once there she took on a whole new lease of life, leaping and bounding everywhere and generally causing havoc, still bleating, although by now it was reduced to not much more than a croak . Amar found a rope and tried to tether her to a post but still she kept on jumping & twisting… 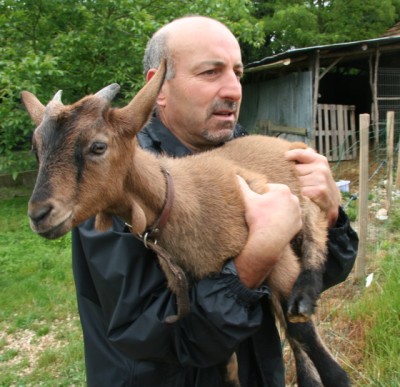 It was at this point that Emma’s resolve snapped and she joined forces with Betsy in floods of tears, dramatically declaring that we were going to end up killing it. ( Emma is well known for her love of animals and is often affectionately called BB by her Dad, after Brigitte Bardot – in her later years of course, when she had turned her attention to campaigning against cruelty to animals!)

The mounting tension was palpable and when Amar loudly suggested that maybe Emma would like to find the goat something to wear and take it home with her & “oh yes, why not marry it at the same time?”,  I thought that maybe his resolve was about to snap too. His exasperated tone, dripping with heavy sarcasm was completely lost on Emma who for a fleeting, worrying moment looked like she was actually pondering over what she had in her pyjama drawer which might just fit…! Thankfully her bemused expression faded just short of the wedding ceremony.

(Joanna from Multifarious Meanderings, I now have a crazy mental image of the goat preparing for its nuptials & wearing a onesie … 😉 )

Luckily I then remembered the old dog kennel and thought Betsy may be happier there. We got the necessary things together and set off down to the bottom of the field for the shelter of the big trees and away from the posse of gendarmes guarding the stable.

It was still raining hard. Alistair led the way lighting our pitch black path with a sorely inadequate torch, but that’s all we could find at 2am. I followed, balancing the kennel on a trolley- not easy over a dark & bumpy field! Amar was next carrying the ever-bleating Betsy, muttering to himself at the ridiculousness of it all and Emma brought up the rear bearing gifts of tears and sympathy & now almost as distraught as the goat! We must have resembled a scene from some alternative nativity play.

The next day wasn’t much better – poor Betsy’s mouth was opening & closing to the rhythm of the bleat but nothing was coming out. She had completely lost her voice. We decided it wasn’t fair to keep her and maybe she still needed to be with her mother so we took her back home. 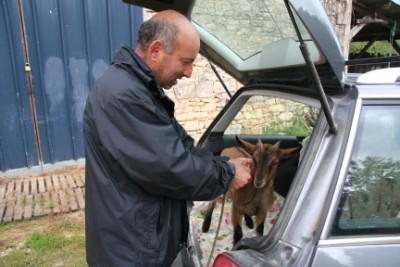 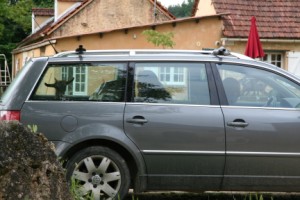 Betsy did eventually come back to Les Crouquets, this time with her Mum, Nougat, and re-named as Bonbons which was altogether a much better experience, but that’s a tale for another time…..!!