Following the cat saga taster from my last post here is the full blown version. 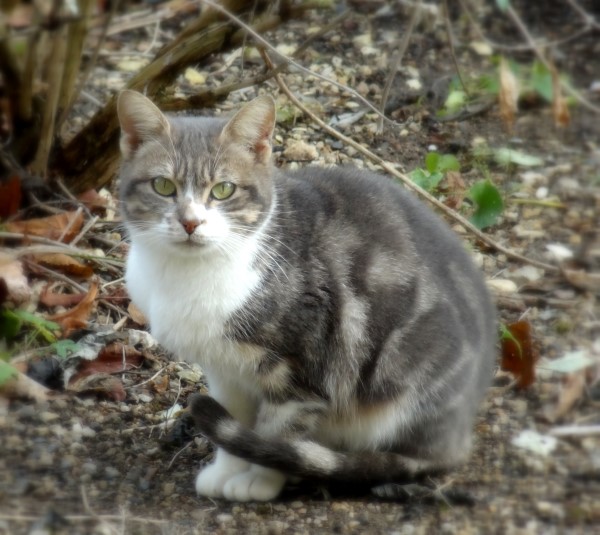 Way back in January I heard a baby crying outside our front door. The baby turned out to be a little cat. It was thin and obviously really hungry.

With her territorial instincts firing on all cylinders Miss Molly was at the door in a flash, hissing and growling, her whole body from the hair at the bottom of her ears to the tip of her tail now twice the normal size. I had a feeling this relationship was going to be doomed from the start and a loud voice inside my head kept shouting over and over “Don’t feed it, whatever you do don’t feed it”. I fed it. 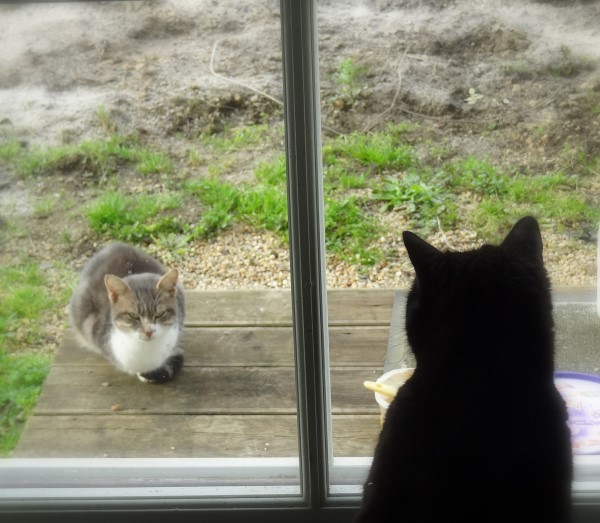 It was an affectionate little thing and desperately trying to come into the house so I assumed it was someone’s missing pet.

I went to the local mayor with posters and asked round the neighbouring villages but no-one recognized or came to collect her and a visit to the vet revealed that she wasn’t microchipped so I was legally free to claim her as our own.

I was tempted and we fell into an easy routine of the little cat sleeping in the locked barn while Molly went out in the mornings and once Molly was back in the house I would let the little cat out. For weeks she sat on the kitchen windowsill every night purring seductively and looking in with huge pleading eyes. 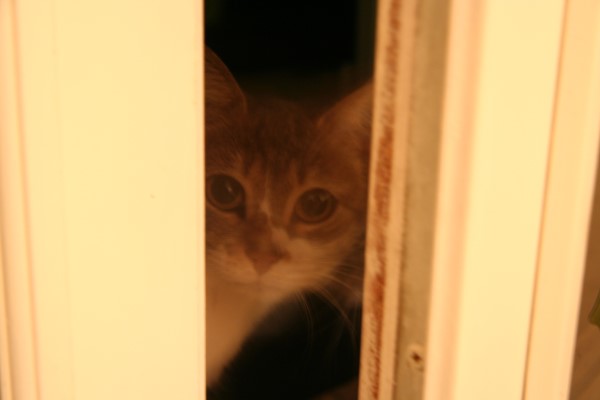 Molly would not be moved though and relented only just enough to sit on the opposite side of the double glazing without hissing and spitting but any unplanned encounters outside was all out war. 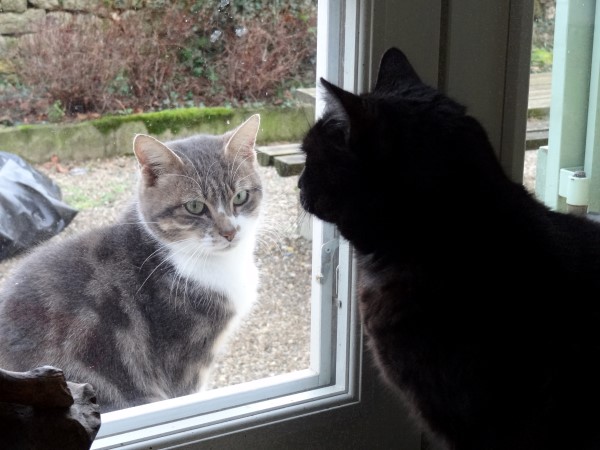 I knew this was going to be impossible to keep up long term and I finally convinced myself that the best thing would be to find the little cat another forever home. It wasn’t that easy though and even after a few half hearted & unenthusiastic attempts my search had drawn a blank.

After a week or two I noticed the little cat wasn’t quite looking or acting her usual self. It then suddenly dawned on me that she must have been flaunting those huge eyes and purring seductively elsewhere with a lot more success than she had had with Molly… yes, Google confirmed it. She’s having kittens. That makes two of us. It will be well nigh impossible to re-home a pregnant cat. 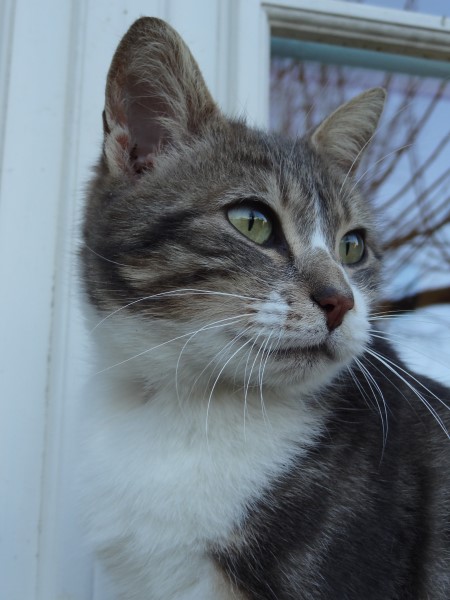 The vet suggested a visit to “assess the situation” and an ultrasound scan revealed at least 4 little beating hearts. The vet was grinning from ear to ear with a gleam in her eye that all but announced ” Congratulations Missus you’re having quads!!” Eh, didn’t she know this was no laughing matter and that Amar certainly wouldn’t be playing the doting Dad? Nope, as far as my husband is concerned this is my bed and I’ll be lying in it on my own.

I know that this is the last thing we all need right now including Miss Molly so how did I find myself not long afterwards looking at Mother & Baby cat kibble and staring wistfully at some tiny kitten shaped babygros? OK the babygro bit is a lie but I did buy the cat food…really, I did 🙁

Various plans have been suggested from a variety of sources…

I’m not really keen on Plan D on both counts so right now I’m leaning towards Plan C and hoping beyond hope that Karma will strut her stuff & send me a long queue of people desperate to give a kitten a good home. 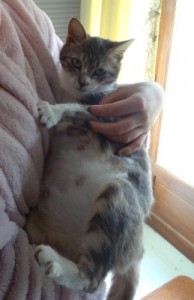 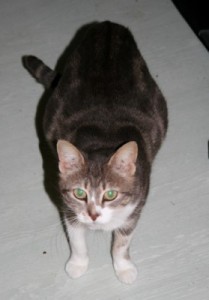 At the minute the little cat * is confined to my workroom surrounded by all the creature comforts necessary while awaiting the happy event.

She’s big – worryingly big…this means the day must be fast approaching when I’ll be greeted with the patter of anything up to 40 tiny paws….

In the meantime Miss Molly is back out and about lapping up her newly regained freedom and obviously thinking that her arch-rival has gone for good. Little does she know…!!

*The little cat is up until now without a proper name – it wouldn’t be good to get too attached now, would it?