Saturday night was the Hunters’ Association Loto evening  – or in other words Bingo night!

We usually only go to these events if we have a cause to support but our brother-in-law is here just now from Paris so we thought we’d go along and show him the delights of rural entertainment.

Things had gone a bit more upmarket and commercial since our last visit with the chance to purchase shiny coloured counters to cover the numbers instead of the bowls of corn kernels which used to be supplied free of charge. As the pace of these bingo nights isn’t exactly frenetic I was able to colour co-ordinate my cards with the new counters. It was too easy. I missed the corn. There was something quite challenging about having to balance the kernels at just the right angle so they didn’t fall off the numbers at the least vibration and this added a whole new dimension to the game…  ok, so maybe I need to get out more… 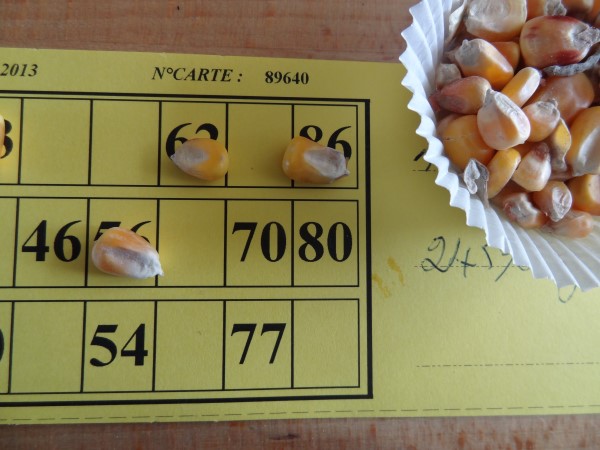 There was a motley assortment of prizes on offer from wheelbarrows full of veggies and enough meat to make a pot au feu for an army, braces of grouse, haircuts & helicopter rides, shoulders of venison and the Pièce de résistance was a 300 € voucher to spend at the local supermarket.

Some of our previous loto nights had more, how shall I put it…esoteric prizes. Vouchers for 10 € of red diesel ( farming community at large here, remember!!), motor oil, a kitchen chair and 25 kg sacks of dried dog food. I remember a sack of such dog food being handed back 3 times until the lucky numbers eventually went to someone who actually owned a dog. At one event each prize also included an individually wrapped condom. If I remember correctly this was the football loto where quite a high number of players were children so the thought process behind this escapes me…the adult fraternity however seemed to think it was hilarious! ( Yes, maybe folks round here need to get out more too…) 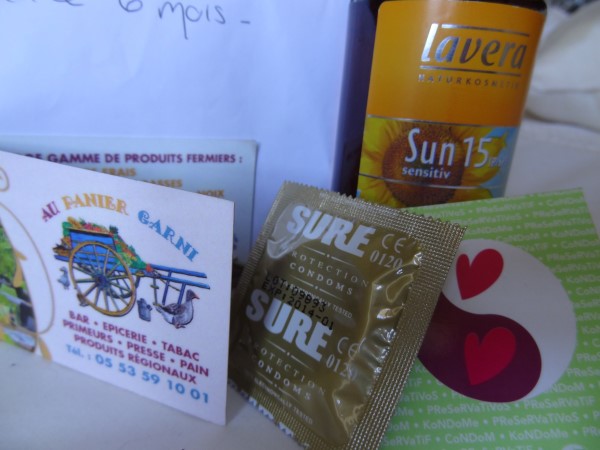 We did ok though and between them Amar & Emma managed to win lunch for 2 at a local restaurant, a 30 € gift voucher for a farm food shop, a platter of cheeses, an assortment of foie gras and other goose products and …wait for it … a live hen! I’m not even too sure this would be allowed in Britain but this is rural France – anything goes!!

Back home with our spoils I thought I’d take a photo to put on Facebook. I set out the cans & jars of goose, the gift vouchers and then opened the box to see the hen. It sat there quietly, obviously still a bit stunned and dejected from having been selected as a lottery prize. We were too complacent though as once the photo was taken  the hen suddenly came to its senses and leaped into the air at full speed clucking & squawking. 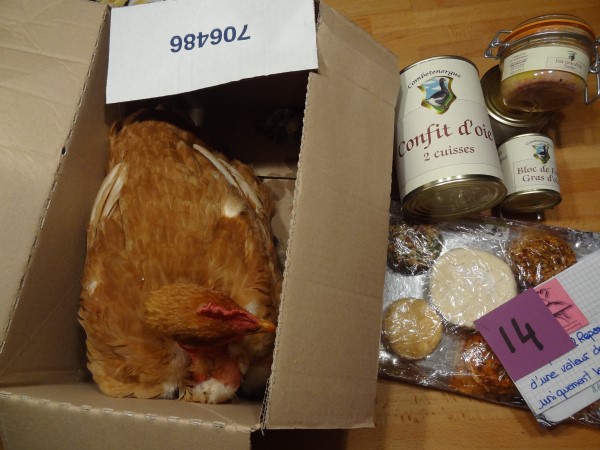 It catapulted itself across the kitchen and landed feet first in the toaster. It broke free before I could grab it, almost knocked itself unconscious by flying into the giant pepper mill then ricocheted off the deep fat fryer and straight into the frying pan which had been left unwashed in our haste to get to the bingo night on time. With its feet now well and truly greased it skidded across the floor straight into Alistair’s hands, emptying the contents of its bowels in the process. (With Emma screeching in the corner, me shouting “Catch it, Catch it!”, and Miss Molly’s eyes growing blacker by the second signalling that she was revving up all her predatory instincts, Ali was already on high alert and ready to pounce.)

Amar just rolled his eyes, declared us all to be débiles (stupid) and went to bed. This was the ornithological equivalent of the recent goat post 😉

I scrabbled about in the dark for a big carton & some hay so the poor bird could spend the night in some relative comfort before joining the rest of our flock. This prize was no doubt intended for the Sunday dinner but instead I spent a couple of hours yesterday witnessing a very complicated and tense ritual as the new pecking order was established. 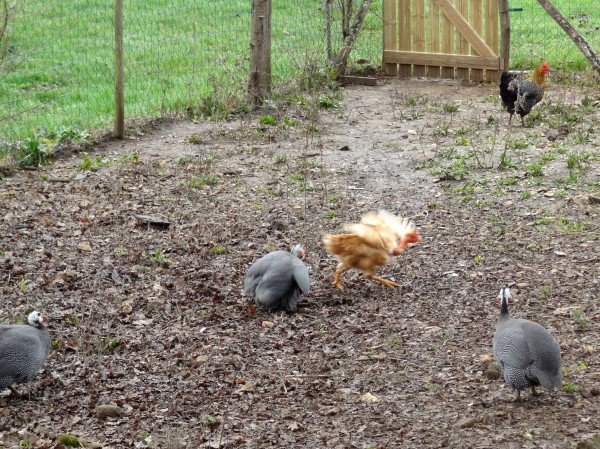 Establishing the pecking order - the guinea fowl were particularly vicious!

I thought that Bingowings was a very apt name for this new addition but unless some innovative and forward thinking perfume house already has plans on the drawing board, it won’t really fit Emma’s theme… so for now it remains nameless. *

We never expected to go out to a bingo night and come home with another mouth to feed…let’s just hope it’s a good layer!

* Just for the record, our little flock are Nina, Lolita, Lempicka, Cacherel, Dolce, Gabbana & Prada…our local hen producer is Monsieur Lacoste so it would be a shame to spoil it!!!